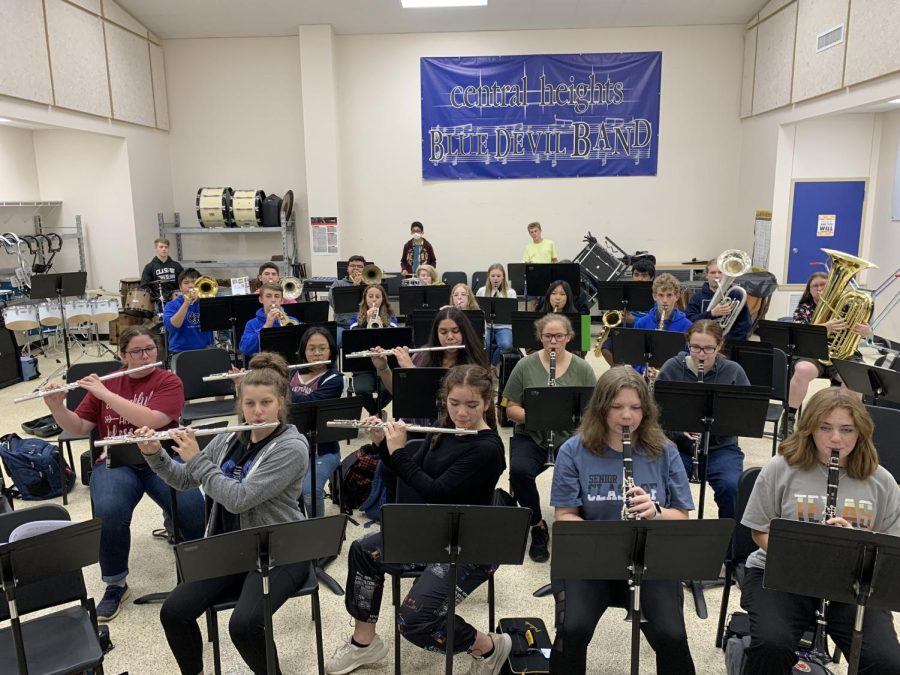 Band may seem like just another extracurricular to most, but to the lucky few who get to experience it first hand, it is a place to learn and grow as a musician. Band director Kayla Myers is very certain that this year’s band is going to be the best yet.

“I’m very confident in this year’s band,” she said. “This is the first time where I can look at this band, and I can see my students. I see my band family.”

The band is almost bursting with new students. Myers is very ecstatic at the multitude of kids who now fill the band hall.

Due to the number of students in the band, the instruments available has become a bit of a problem. Myers is working to combat this issue to help bring more opportunities to future students.

“We’ve actually run out of instruments,” she said. “That’s caused a little bit of a problem, but I’m planning on purchasing a few more instruments, and I’m encouraging the older students to buy their own instruments, so we can pass the used school instruments down to the younger ones.”

Myers said the band seems to be improving since last year.

“I think, over the past two weeks, we’ve worked a lot on technique,” she said. “Most instrument groups are fully represented. I’m not struggling with getting parts covered this year. I feel like it’s going to be a lot better than it has been, and it’s just going to continue to grow.”

Competitions and events for the band are to be expected in full force this year.

“I really want to see more students get involved with All Region tryouts this year,” she said. “I also plan on going back to UIL Concert and Sight Reading. I think, if we continue to make more improvements with our sound, we should be able to do a lot better this year than we did last year.”

A new uniform can also be anticipated this year for pep performances and other events.

“For uniforms, I actually started designing a new polo, and about five minutes into it, I realized that I was picking the exact same polo that we have,” she said. “I like the design. It’s very flattering for most people. It looks very classy with the black and the little blue accents on it, so we’re going to keep those as uniforms.”

Myers has also mentioned a fundraiser that she plans to do this year.

“Later on in the year, I plan on having a shirt fundraiser,” she said. “It’s an optional shirt this time because we have the polos, but I would like to see lots of people get a band shirt so they can represent around the school, and people know who is in band. It makes the younger kids look up to you because they see that shirt on you, and then they want to join, too.”

A band teacher’s job is as much of a journey as it is work. Being able to watch her students grow up and flourish within the band is worth every second to Myers.

“I like being able to teach so many students that are so many different ages, and watching them grow,” she said. “The sixth graders that I started with are now in eighth grade, and I’m excited to stay here, and hopefully see them through to their senior year, and then just keep on seeing kids start off as beginners and then graduate as real band kids.”